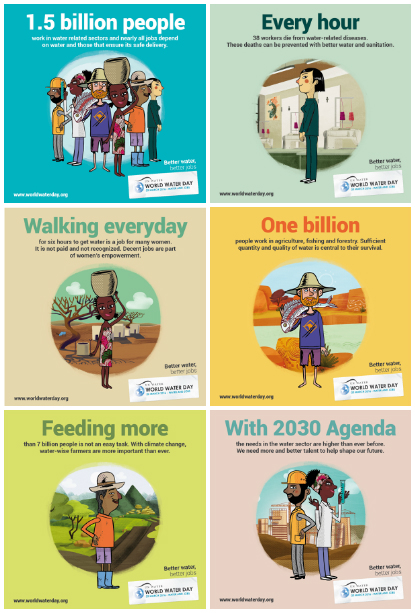 World Water Day is an international observance and an opportunity to learn more about water related issues.

World Water Day dates back to the 1992 United Nations Conference on Environment and Development held in Rio, Brazil where it was recommended to designate an international observance for water. The United Nations General Assembly responded by designating 22 March 1993 as the first World Water Day. It has been held annually since then.

Each year, UN-Water - the entity that coordinates the UN's work on water and sanitation - sets a theme for World Water Day corresponding to a current or upcoming challenge. The engagement campaign is led by one or several of the UN-Water Members with a related mandate.

On World Water Day, countries and tens of thousands of individuals and organisations get involved in several ways. They get informed, engaged and act. Together they make a difference - especially for the most vulnerable people on our planet but also for future generations.

THEME IN 2016: WATER AND JOBS, COORDINATED BY THE ILO

“Water and Jobs”is the theme of World Water Day 2016. It is coordinated, on behalf of UN-­‐Water, by the International Labour Organization (ILO) -­‐ the UN entity that promotes rights at work, encourages decent employment opportunities, enhances social protection and strengthens dialogue on work-­‐related issues.

The theme highlights how both water and jobs have the power to transform people’s lives: Water is central to human survival, the environment and the economy and decent work can provide income and pave the way for broader social and economic advancements.

Today, almost half of the world's workers -­‐ 1.5 billion people -­ work in water related sectors and nearly all jobs depend on water and those that ensure its safe delivery. Yet the millions of people who work in water are often not recognized or protected by basic labour rights. Take the example of a young girl who has to walk for hours every day to fetch water for her family. This is a job. But it's not paid and it's not recognized. If the delivery of water was ensured, this girl could be in school instead.


Water and sanitation also has a strong impact on workers’ lives and health. 2 million work related deaths happen every year. Out of those, 17% are water-­‐related (poor quality drinking water, poor sanitation, poor hygiene and related lack of knowledge). For example, in some factories women use rags from the factory floor for menstrual cloths as there is no access to improved sanitation facilities. These cloths are charged with chemicals and often freshly dyed which can lead to infections and even death.

The basic provision of adequate water, sanitation and hygiene (WASH) services at home and in the workplace enables a robust economy by contributing to a healthy and productive population and workforce, with benefit-­‐to-­‐cost ratios as high as 7 to 1 for basic water and sanitation services in developing countries. Conversely, people who have the least access to water and sanitation are usually the most likely to have poor access to health care and stable jobs, thus feeding the cycle of poverty. In this regard, equality gaps persist between urban and rural dwellers, across genders, and between the richest and poorest segments of the population.

Water also affects workers lives through its quality. Water affects workers' lives through its presence, its quality and its quantity. In the irrigated agriculture sector for example, which represents 70% of freshwater withdrawals worldwide, a farmer's job depend on their ability to manage the available freshwater while at the same time facing challenges such as groundwater depletion, climate change and water scarcity. In the forestry sector, it is sometimes necessary to reduce deforestation to avoid water shortages or excess water flows with negative impacts on a region, resulting in lay-offs in the industry.

Sustainable water management in its broadest sense, which encompasses ecosystems protection and restoration, integrated water resources management (IWRM) as well as infrastructure development, operation and maintenance, combined with access to a safe, reliable and affordable supply of water and adequate sanitation services, creates an enabling environment for long-­‐term employment opportunities, as well as development and growth across different economic sectors.

Water has the ability to create paid and decent jobs. It can contribute to a greener economy and sustainable development. But for this to happen, we need more qualified workers. And we need those workers to work in dignity, equality, safety and have a fair income. You can read more about the relationship between water and jobs in the World Water Development Report that is released on 22 March 2016.