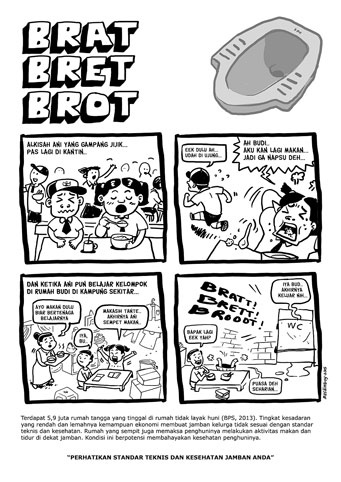 Lack of space: This comic strip by Adimas “Masdimboy” Bayu draws attention to the widespread lack of health standards in slum areas, including the placement of toilets close to dining areas.

Within the last 10 years, Indonesia has seen consistent development of sanitation and drinking water facilities, but will it be enough to provide universal access by 2019?

Universal access to sanitation and clean drinking water is one of the Millenium Development Goals (MDGs), a commitment that Indonesia signed in 2000.

While Indonesia has shown this constant improvement, the figures are practically incompatible with the country’s ambition to provide universal or 100 percent access by 2019.

The ambition is stipulated in the government’s 2015-2019 National Mid-Term Development Plan (RPJMN).

So, Indonesia basically needs to massively accelerate in terms of its development programs to reach its ambition of providing universal clean drinking water and basic sanitation access by 2019.

One of the programs is called the Sanitation and Drinking Water National Conference (KSAN).

The KSAN is a bi-annual event organized by the Drinking Water and Environment Restoration (AMPL) network, which is a working group of stakeholders in water and sanitation matters, including representatives from the government, tap water operators and some non-governmental organizations established in 2007.

This year’s KSAN, held last month at the Haji Usmar Ismail Film Center in Jakarta, still carried the same agenda of developing collaboration among stakeholders so that they could formulate acceleration programs and raise public awareness about the importance of universal access to clean drinking water and sanitation.

While the agenda was still the same as that of the previous years, there was something different and unique in the way the conference conveyed its message this year. It was not a boring conference like other conferences on public issues; instead it was delivered with an entertaining and engaging narrative and style. 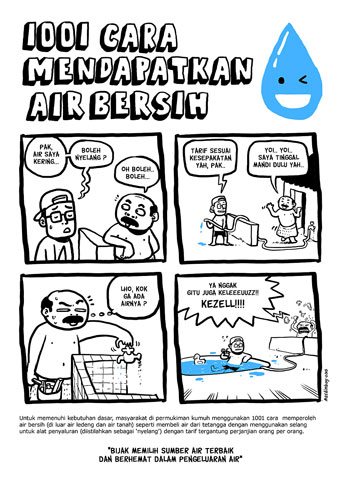 By any means: This comic strip by Adimas “Masdimboy” Bayu describes how residents in slum areas get their clean water through various means, including a practice where they get clean water from their neighbors through a pre-agreed price.

One of the highlights of the conference was a comic strip exhibition that talked about the issue of water and sanitation in slums, drawn by Adimas “Masdimboy” Bayu.

Masdimboy’s comic illustration threw a one-two punch on the lack of awareness regarding sanitation and clean water among slum dwellers. Some of them are satirical; some are just down right dirty and filthy.

For whatever the comic strips are, satirical or disgusting, they manage to convey the important message about proper sanitation and clean water facilities in an engaging and entertaining way.

For example, in a strip entitled Makan Besar (Big Meal), Masdimboy showed a couple of lele (catfish) talking in the river about a big meal that is about to come. In the next panel, the big meal that the fish plan to eat is apparently a large chunk of feces from slum dwellers who use the river as their public toilet.

The Big Meal story basically conveys that city dwellers, who like to consume lele for meals, might not aware of the fact that they also indirectly consume someone else’s leftovers.

AMPL head Nugroho Tri Utomo said that an engaging delivery of messages through entertaining media like comics was something that the group believed would be able to raise more awareness among the public about the importance of access to clean drinking water and sanitation.

“When all elements of society have the same comprehension about universal access and they are also committed to provide their support in the form of direct action and cooperation, then we are optimistic that our goal for 2019 can be reached,” Nugroho said.

Another highlight from the conference was an award ceremony for 16 individuals who, using mostly their own willpower and resources, had managed to develop clean drinking water and basic sanitation access facilities in their regions.

“All of these individuals are heroes as they have pledged their lives and work to provide solutions,” National Development Planning Board (Bappenas) head Sofyan Djalil, who gave his speech during the conference, said.

Some of these individuals included Sugeng Triyono, a corporate banker who left his job to establish his own trash bank, Bahrudin, a cleric from Lampung who constantly preaches about the importance of clean sanitation during his sermons, and Ellena Khusnul Rachmawati, an activist from West Nusa Tenggara who has been advocating for poor people in her region to gain access to proper sanitation since the year 2000.

Nugroho said that in the future, he hoped more and more individuals and corporations would be more driven to become part of the solution to provide access to clean drinking water and basic sanitation.